A dive computer allows divers to extend their time and safety while in the water. Considered essential by most dive resorts around the world today your dive computer should be one of the first things you should buy. Since back in the 1980’s dive computers have been revolutionising the way that we dive. Before the dive computer came along you would calculate your dive time based on the maximum depth you were diving to. The dive computer changed this significantly by being able to calculate your max dive time based on the actual dive allowing multi-level diving. Modern dive computers update you constantly on how much time you have left, based on your current depth. Essentially this allows you to remain underwater for longer in safety with potentially shorter safety stops.

Watch our 4 minute guide to choosing a dive computer:

Put simply dive computers use a depth sensor and a timer to work out how fast you absorb gases into your body by using an algorithm inside them. The deeper and longer you stay down the faster you absorb the gases you’re breathing and your computer monitors your depth and time at all times.

Your dive computer keeps you safe and has multiple alarms to let you know if you go down too deep, ascend too fast or if you have an air integrated computer it will even tell you how long your air will last.

When you ascend during a dive your computer will automatically go into a safety stop and tell you what depth to stay at and count down how long for. Most computers today alarm when you do something wrong like ascend too fast or stay down too long so you can concentrate more on the dive at hand.

Pretty much all dive computers today come with Nitrox algorithms so you can swap between air and nitrox. These computers can be set to different levels of O2% and some can even handle multiple values during the same dive if you dive with multiple mixes. Trimix is the next level by adding Helium to the mix and requires further training before you can dive safely on it. If you’re thinking of progressing to far deeper depths then a trimix computer is a consideration.

There are various different decompression models coded into hundreds of wearable dive computers around the world that will work out your Nitrogen loading based on your dive profile but they won't give the same results as one will be more conservative than others or use a decompression theory.  Because of this if you're diving with a computer different to your buddy you can be waiting around for them to end a safety stop or forced to ascend because they are reaching their No Decompression Limit (NDL) faster than you are.

Some manufacturers have understood the issue of multiple algorithms being used so they have coded multiple algorithms into their dive computers, so you can dive on their Pelagic DSAT algorithm, similar to the ones you have been taught or for a more liberal dive with longer NDLs. Or you can set your computer to a Pelagic Z+ algorithm to match your buddy's dive computer so you can match their profile better.

The Pelagic DSAT is designed for your warm water, minimal effort diving so it allows you to stay down longer whereas Z+ is more for the rigorous demands of repetitive, cold-water decompression diving at altitude.

Most computers will have a conservatism factor that you can change because not all divers are the same.  Algorithms are fairly generic and everybody is slightly different when it comes to fitness and body composition so you can tell some computers to be more or less conservative based on your body as well as altitude of the dive too. 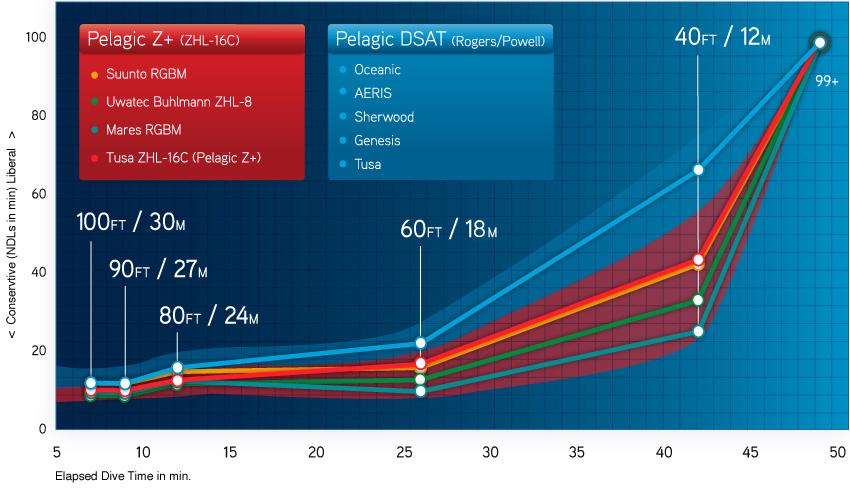 The Suunto Reduced Gradient Bubble Model is a state of the art algorithm for managing both dissolved gas and free-gas in all its stages in the tissues and blood of the diver. Suunto computers have one of three RGBM models inside, either the standard RGBM which is great for recreational diving, RGBM Technical for deeper advanced diving and Fused RGBM that combines the two for the best of both.

It is a significant advance on the classical Haldane models, which do not predict free-gas (microbubbles). The advantage of Suunto RGBM is a more accurate representation of what is happening in the diver’s body, through its ability to adapt to a wide variety of situations.

The Suunto RGBM addresses a number of diving circumstances that have not been considered by previous dissolved gas models, adapting to:

The Suunto RGBM algorithm automatically adapts its predictions of both the effects of micro-bubble build up and adverse dive profiles in the current dive series. It will further modify these calculations according to the personal adjustment that a diver can select. Essentially when you dive you take on gas, this is called on-gassing. You need to off-gas for a sufficient time during surface intervals to avoid illness, the Suunto RGBM helps you to do this correctly. Click here to see our range of Suunto Diving Computers.

Some dive computers will have customisable Gradient Factors that give you better control over your decompression algorithm. Many computers allow you to set conservatism factors depending on your fitness level and activity levels but Gradient factors expand upon this and allow you to adapt your dive profile to exactly what you want it to be. Particularly useful for decompression dives, Gradient Factors are a big way for you to set where your stops will be and you can reduce your stop times and match your buddy's algorithm. If a dive computer has Gradient Factors built in that you can change they often put GF on the end of their algorithm so look for something like ZHL-16CGF for a computer with Gradient Factors. If you don't know how Gradient Factors work then it's best to leave them alone and dive on factory settings before you understand what they do to your diving.

Not all displays on computers are the same. Entry level computers will have a segmented display much like a digital watch and can be harder to display complicated information.  Dot Matrix screens have lots of small segments that can spell out more complicated information and be easier to understand. Modern dive computers have colour screens that have far greater detail and intuitive colours but do use more battery power so tend to be rechargeable.

Colour screens are best as the colours draw your eye to important information if you get close to a limit. The LED or LCD backlight for colour screen computers makes them easier to see in low light and poor visibility.

Segmented display computers have a range of symbols outside of the centre that tell you need to read the manual to understand.

You may want to consider not only logging your dives in your log book but also on your PC. All major manufacturers now have models that can download your dive data to your PC. This allows you to see your whole dives in profile and provides extra information not normally accessible via the dive computer itself. Some computers are now including the download software whilst with others you have to purchase them separately.

The fashion in the UK is for wrist mounted computers whereas in other areas console mounted computers are the norm. There are arguments for both systems but here are a couple of points you should consider before deciding which would suit you best:

Console mounted computers are larger and are attached to your regulator via a hose. This makes them less likely to be mislaid and easier to read. Console mounted computers use battery power even if only training in the pool meaning the more you practice, the more you will spend on batteries or having to recharge but a pool dive can lock you out of your computer for 24-48hrs for rapid ascent.

Wrist mounted computers can be used for other purposes such as free diving swimming and other sports. Some computers are solely made for apnea freediving and don't have the same alarms and algorithms as most dive computers.  Click here to take a look at our range of computers with Apnea Modes.

There are a few basic considerations with using a dive computer which you should be aware of: Read the instruction manual thoroughly before using the computer so you understand how the computer works and what it's trying to tell you. Never share a dive computer; if one of the buddy pair is not diving on a computer you must abide by your dive tables. Do not “ride the zero”, this is waiting for the no stop time on your dive computer and then ascending a few meters and waiting again to stay underwater longer. Although a dive computer is meant to extend your dive time this is pushing your luck. Remember, to help avoid decompression illnesses follow the common sense suggestions you learned in training, avoid dehydration, alcohol etc. and that algorithms are generic so you may be in the limits on your computer and still be affected.

Modern dive computers are often made with user changeable batteries. However only a few have watertight battery chambers meaning that if you fit the battery wrongly and it floods, the whole computer is ruined. For this reason most divers still return their computers to service centres for battery changes and servicing. Although more expensive than doing it yourself, having professionals do it is much less expensive than a new dive computer.

Screen guards are now fitted on most dive computers to stop the screen getting scratched. These guards will quickly become very scratched and although difficult to read on dry land once submerged the scratches virtually disappear. However if the guard becomes too scratched or cracked replacements are available. If your computer does not have a screen guard make sure you purchase a perspex (not stick on) cover for it.