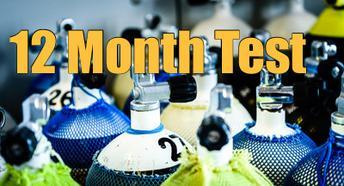 The International Standards Organisation has recognised BSAC's proposal of a risk-based approach with a separate classification for 'recreational diving cylinders'.  While this is a step towards keeping the 2.5 year test it hasn't been ratified yet so we all need to keep our fingers crossed.   So it seems that the 12 month cylinder test might actually happen despite lobbying against it.  In February a British Standards Institute meeting was held in South Africa to organise the amendments but BSAC are still discussing a work around similar to the American system that defines recreational SCUBA cylinders as 'sport and recreation' equipment, separate from commercial equipment so can be given a different testing schedule. The change stems from the Vienna Agreement to standardize procedures across all those who sign which means we automatically adopt the new standards as we signed it back in the 1990s.  Right now the estimate for when the new standards are enforced is October '17 so a lot of cylinders will need testing before they can be filled after that so don't be surprised if you're refused at a filling station. This has sparked fears of underground testing and filling in some circles and actually increasing the chances of incidents instead of reducing.  Some divers already test and fill their own cylinders but fears are that more divers will try it themselves with less knowledge which can lead to an accident.   The question if another type of test such as a Visual 'Lite' Test will be introduced as a yearly test and what will be included or required has arisen. The price of a Lite Test seems to be estimated around £8-10 that some service centres are considering which includes a visual inspection of the outside and inside of the cylinder only similar to the way the Americans currently operate.  This means that the yearly cost of testing a cylinder won't actually change that much just the time it takes to drop your cylinders off to be tested.

There are of course some positives to the change the first being the reduced chance of filling a rusty or damaged cylinder as you know the inside of a cylinder can turn from good to bad very quickly and a simple visual test can prevent a filling going bad.  I've seen a few cylinders that look perfectly fine from the outside but take that valve out and the rust will pour out.  When we're taught to dive we're told about the importance of keeping some pressure in your cylinders to keep moisture out but we're not the only users of compressed gas cylinders.  Airgunners and a whole range of other industries who use cylinders who will also be affected, not all of whom know the dangers of overfilling, dropping and moisture ingress for a cylinder. It'll get people into their local dive store, it's no secret that Local Dive Stores are closing all over the UK but if divers are visiting more often then hopefully they'll get a boost, not just from the test but upgrading gear and getting people back in the diving community to dive more often. It'll be a lot easier to tell if a cylinder is out of test, checking cylinder dates can take a moment to add two and a half years to the date stamp to work out if the cylinder is in test but a 12 month test will be easy and you'll always know what month to get your cylinders tested each year.     It's a hard decision and I can see both sides of the proposal for and against but either way it looks like it's going to happen so we all need to adapt for October.  The final details on everything haven't been released yet so we'll just have to watch this space for a while