It looks like you're visiting us from outside Australia

The Shearwater Swift Transmitter is a smart wireless air transmitter for your Shearwater AI Dive Computer. The Swif, unlike most transmitters, listens for other transmitters and waits until the airwaves are clear to reduce chances of conflicting signals from other transmitters. Fitted to your 1st stage the Swift will broadcast your tank pressure to your dive computer so that you can see how much gas you have left on your computer.


Who is the Swift Transmitter For?

The Shearwater Swift is for divers who dive with multiple transmitters or in close proximity to other divers using transmitters. The Swift has a random broadcast frequency so, it's less likely to clash with others that broadcast at predictable intervals. But, the Swift also listens for other transmitters and broadcasts a moment later so there are no mixed signals or interference. 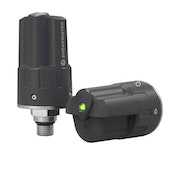