The Future of Diving Gear June 3, 2016 by lukesheppard 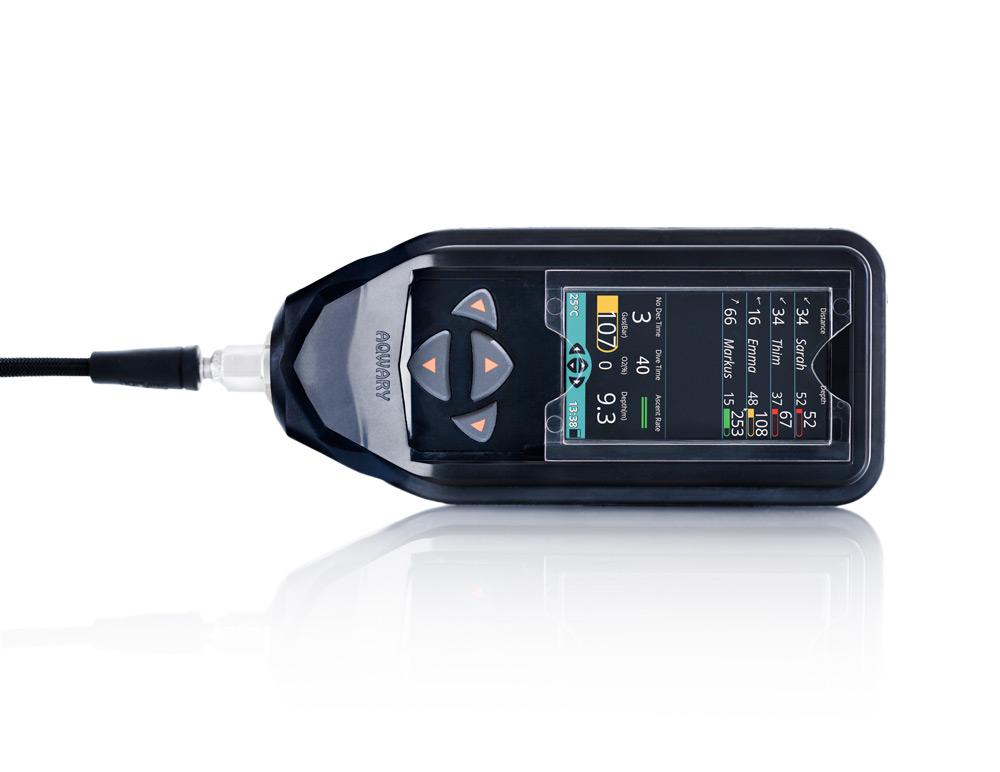 What dive kit will we be using in the future? We take a fun look at new technology discoveries and James Bond style gadgets to glimpse at what future underwater kit may be in store…

Technological advances in diving equipment have made a giant stride in the last ten to 15 years. Many of the new gadgets on the market are the result of more of us dipping our fins in the world of extended range diving, coupled with extraordinary advances in personal computing devices.

Mixed gases, such as nitrox, have firmly shaken off their ‘dark art’ image and established their presence in the mainstream. Advanced thermal protection, powerful dive lights, digital cameras, integrated air computers and computerised dive logs have all become as common as a carabineer clip.

To grasp just how far we’ve travelled, just imagine if you had explain a Go Pro to a diver 15 years ago? Not easy.

Short of hitching a ride in a DeLorean with custom fitted Flux Capacitor, we can only guess what sort of gadgets will become the diving norm in the next ten to 15 years.

My dream gadget of the future is an underwater GPS with 3D dive site maps. What a navigation revolution that would be, particularly in compass-confusing conditions. GPS itself is not yet suited to underwater, but surely it is only a matter of time before we’ll be navigating ourselves underwater with our gadgets as easily as we do on land.

Swedish manufacturer Aqwary recently announced the development of Smart Console, which allows diver to share information such as location and air supply status through ultrasonic, subaquatic networks. Aqwary managing director, Anders Brodin, came up with the idea of the console after a few dives fretting over his children’s air supply.

The Smart Console’s most notable feature is its ability to communicate with nearby units through four ultrasonic hydrophones. This communication network allows you to see the name, position, depth, temperature and air supply status of up to 70 other divers within a 100m range.

If any divers within the Smart Console range run low on air, an alert is sent over the network and to a boat on the surface. Divers can also broadcast a distress signal manually if they need help.

Unsurprisingly the Aqwary Smart Console bundles come at a price, setting you back more than a thousand pounds for a console package. Of course, its network relies on everyone else, as well as the dive boat, owning the system too. 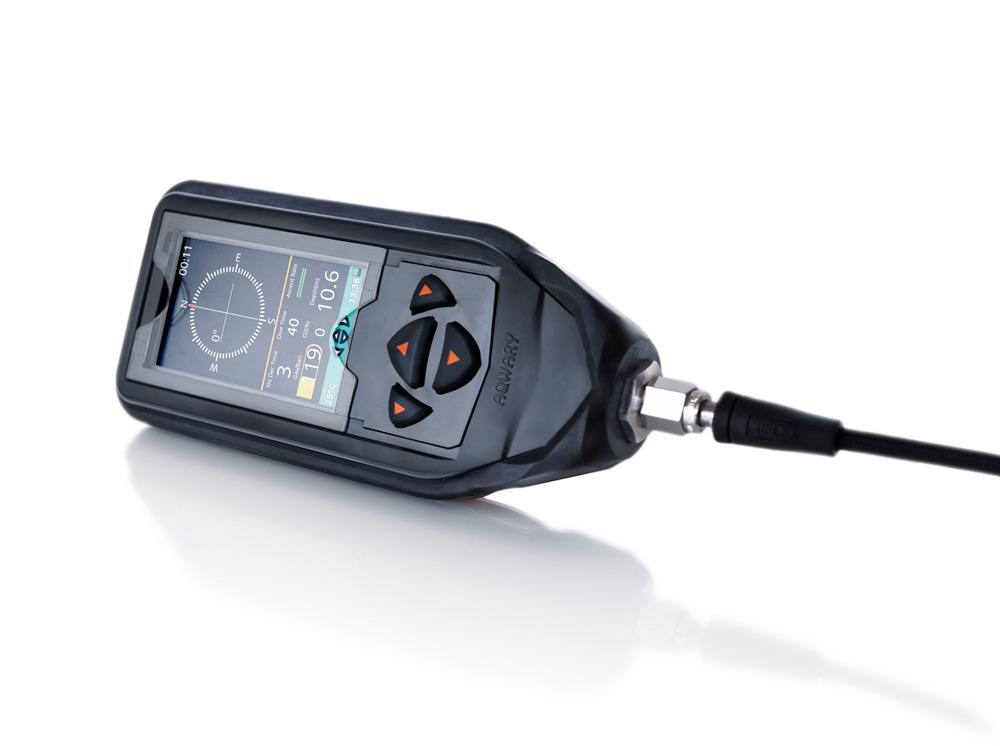 I can’t help but wonder, however, at the information overload potential for divers who first and foremost need to keep their dive profile and air supply in check. Then again, if my seven-year-old nephew’s incredible ability to navigate the baffling complexities of the computer game Minecraft is anything to go by – the next generation will not bat a digital eyelid at such advances in diving technology.

Odds are the future for diving technology advances will focus on reducing the limits placed on all of us by air supply and physiological pressures. Judging by latest news, it seems James Bond’s outlandish diving gadgets may not have been too far off future reality.

A new material recently synthesised by researchers has the ability to absorb oxygen from water. Scientists says just a spoonful of the crystalline material can absorb oxygen out of a room, or body of water, and then release the breathing gas to where it’s needed.

Professor Christine McKenzie of the University of Southern Denmark believes the crystals will become valuable to patients with lung problems who have to carry heavy oxygen cylinders. But she also sees the potential for divers, who will potentially be able to get oxygen from the material as it filters and concentrates oxygen from surrounding air or water.

“A few grains contain enough oxygen for one breath, and as the material can absorb oxygen from the water around the diver and supply the diver with it, the diver will not need to bring more than these few grains,” McKenzie explains.   According to one young product developer, we may well be ditching our cylinders in favour of a helmet to provide all our breathing needs. I recently spoke to Thomas Winship about his third year final project for his BA (Hons) Product design degree at Staffordshire University, for which he came up with the idea of the ORB rebreather helmet. A conceptual design based on what diving may look like in five years; the ORB helmet is a closed circuit rebreather, which covers the entire head of a diver. 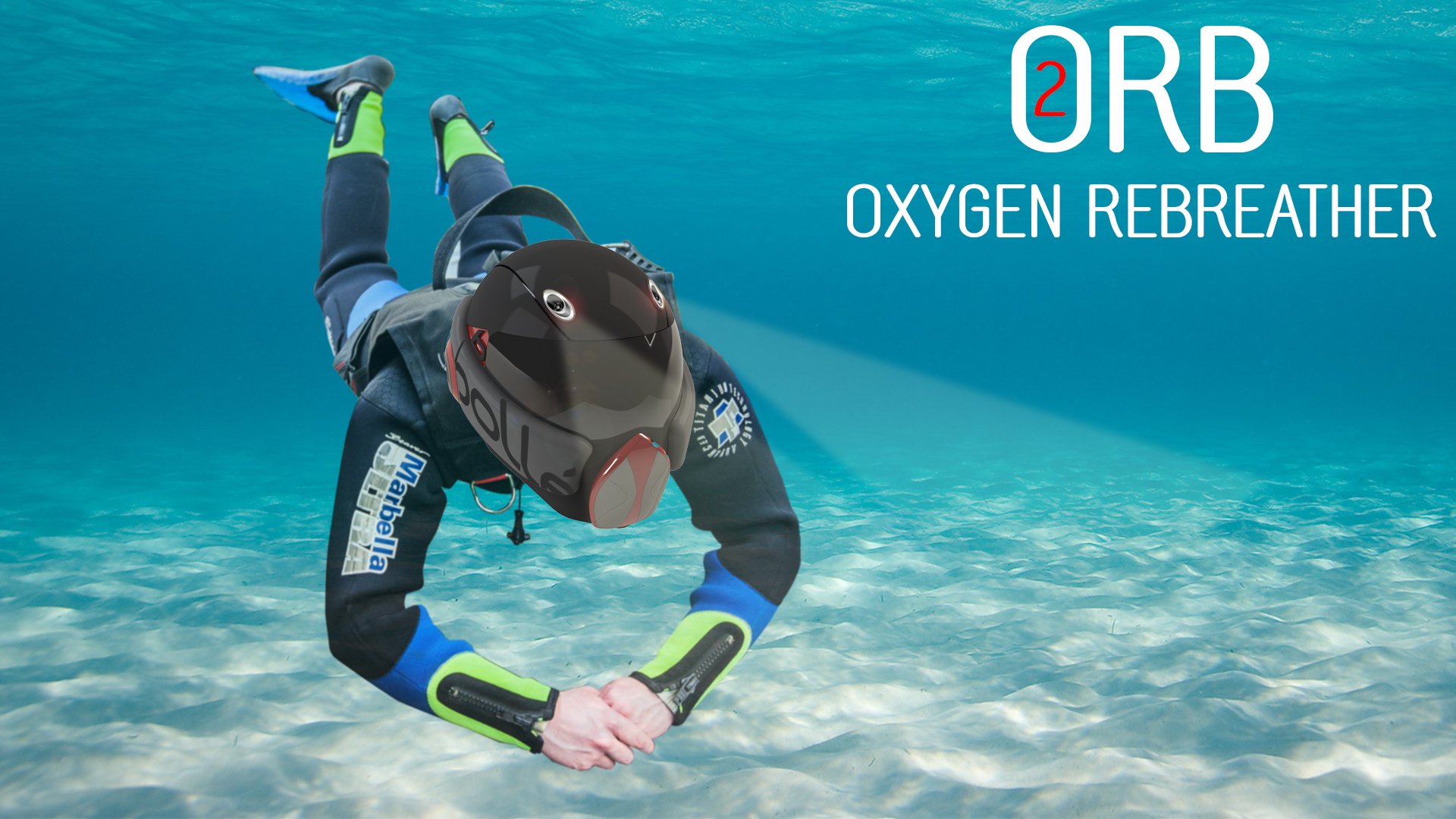 Pressure-resistant, his idea is there is no need to equalise the ears. The helmet is also fitted with Bluetooth technology to allow divers to communicate with each other.

Although not a diver himself, Thomas says diving has always fascinated him. He admits there are obvious issues of body pressurisation and the need for the development in rebreathing technology to allow for such a small unit to be used. Nevertheless, he believes his design has the potential to become reality and he has already been approached by divers and manufacturers about development.

“I began looking into issues with scuba diving and possible faults and setbacks and once I had a listed what I could I went to several scuba diving venues locally and further afield,” explains Thomas. “I spoke to many scuba divers at various levels and asked them what they’d improve about the scuba diving experience. This gave me a second list. I compared both lists and chose a set of several issues that I believed were the most important as well as the most likely to be achieved.”

Thomas believes scuba diving is ‘due an advance in technology’ and believes the way forward would be to transform bulky and heavy equipment into something more lightweight and easy to use. Currently, he believes his helmet would only realistically be able to be used in shallow depths because of pressure issues with the body. 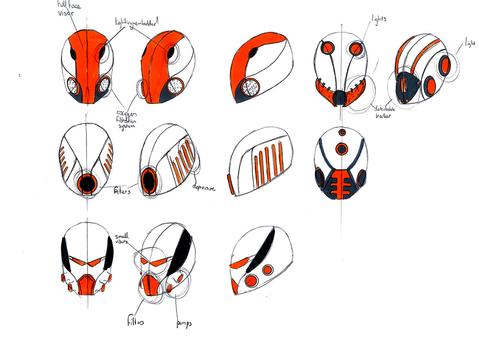 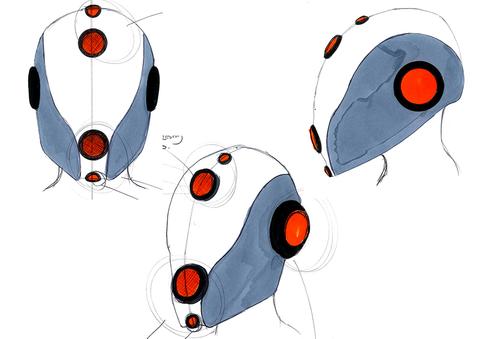 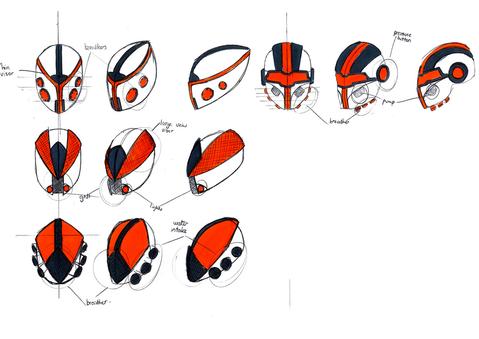 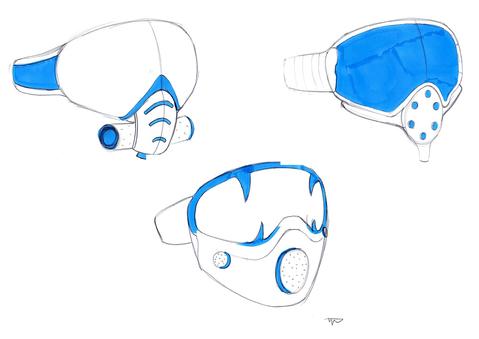 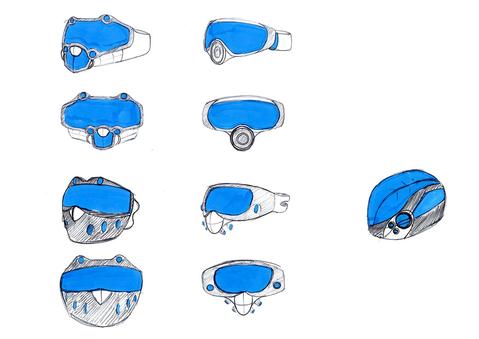 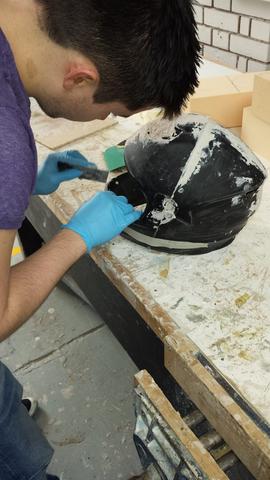 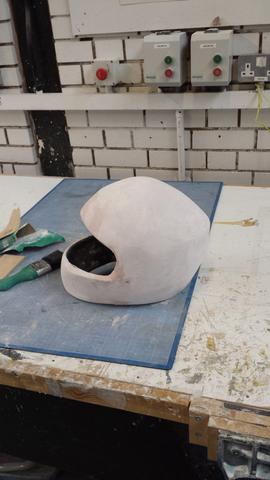 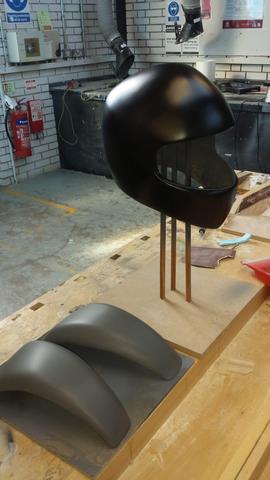 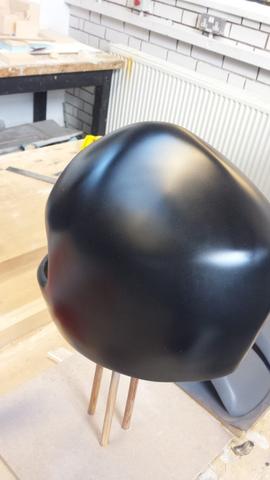 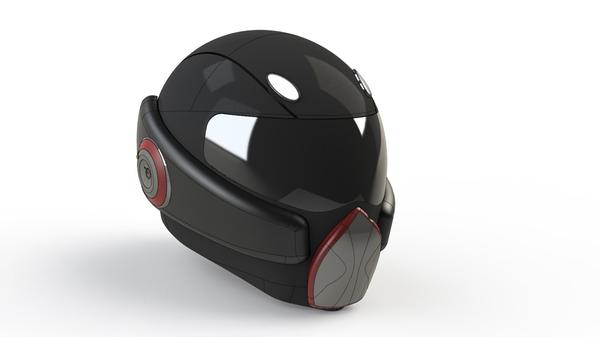 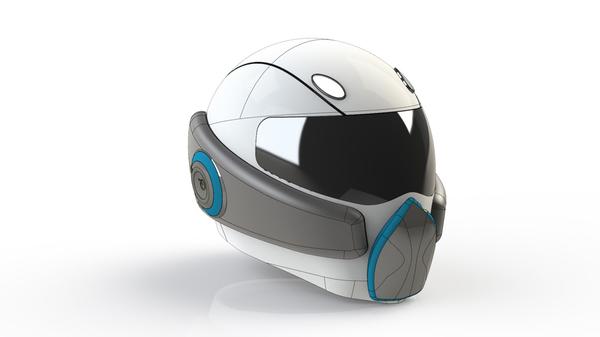 “I found that Nissan are currently developing technology to compress nitrogen and hydrogen for their future fuel technology for transport,” he explains. “This is where I found my timeline of 2020 as well as my compact gas disks that fit into the helmet comfortably without interrupting the form of the helmet itself.

The initial idea for this helmet is that it would be sold to scuba diving rentals around the world in the most ideal diver locations. It’s a bespoke helmet that would be made to fit the user as well as suit their personality by being able to completely customise the overall appearance making this a sort-after piece of equipment.”

Thomas says lack of funds and time have put future development on hold, but given the chance he would make a series of improvements, such as using layers of Dacron and Urethane coated polythene to pressurise the carbon fibre helmet. He would also design a heat run-off from the system to prevent misting and condensation.

“Every year new re-breathers are being released which are smaller and more compact and still stick to my timeline of a big jump in the technology coming when Nissan finally crack its new compact gas technology,” he adds.

While the obvious enthusiasm of developers is inspiring and exciting, it does seem, even to the most gracious of cynics, the reality of exact science is yet to catch up. We’ve come a long way, so who knows what weird and wonderful gadgets we’ll be buddied up with in the future? Why not share your ideas on the ideal bit of futuristic diving kit in the comments section…