Algorithms And The Modern Diver April 15, 2015 by lukesheppard 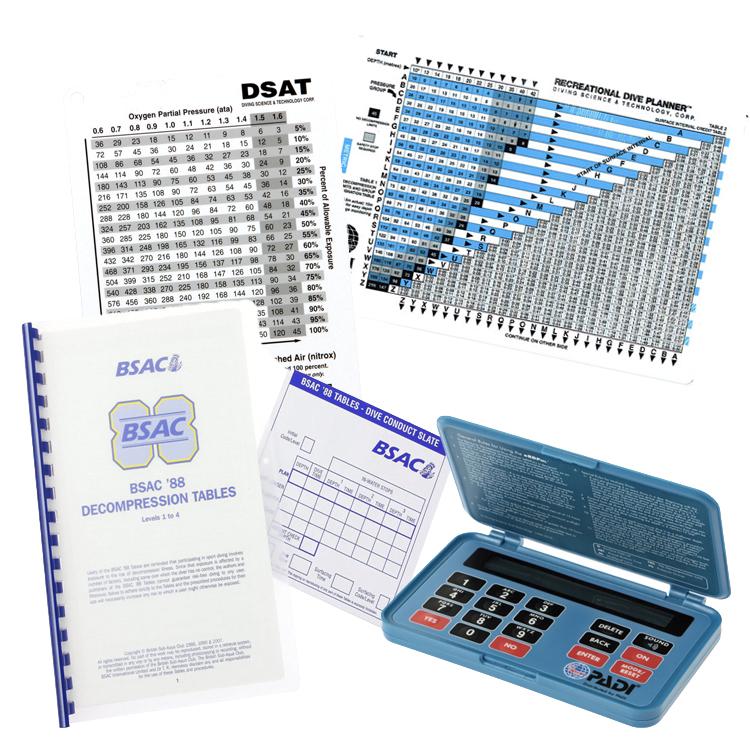 Everybody is taught basic dive tables when they learn to dive and, hopefully, the theory behind them and what they mean.  Your first experience with decompression theory will have been with something like the PADI RDP or BSAC ’88 tables which all started with Haldane’s decompression model for Royal Navy divers.  These tables calculated how much Nitrogen (N) is absorbed into your system due to the increase in pressure and the release of N using various tissue compartments with different half-times.

can be quite rigid when it comes to multi-level dives and you have to be very regimented when it comes to times and depths but when people dive recreationally they rarely go down to one depth for a given time before ascending to another in a rigid pattern so equipment manufacturers have made wearable dive computers with built in algorithms.

are dive tables built into your dive computer which it uses in conjunction with its depth sensor and timer to work out how much gas is being absorbed and expelled at any given time, this is all added up to produce you No Decompression Limit and other information on the screen.  With experimentation and the use of mixed gases in diving today the algorithms are calculating the levels of various gases in your tissues from years of highly advanced microscopic physics experimentation.  Every day scientists are learning more about how gases act in our bodies under pressure and update their algorithms accordingly.

Because everybody is different and without invasively measuring the amount of Nitrogen in every different type of body tissue; each algorithm has a level of conservation built in but their are still variations between different computers, especially when you have the option to change your personal settings.

there are various different decompression models coded into hundreds of wearable dive computers around the world that will work out your Nitrogen loading based on your dive profile but they won’t give the same results as one will be more conservative than others.  Because of this if you’re diving with a computer different to your buddy you can be waiting around for them to end a safety stop or forced to ascend because they are reaching their No Decompression Limit (NDL) faster than you are. 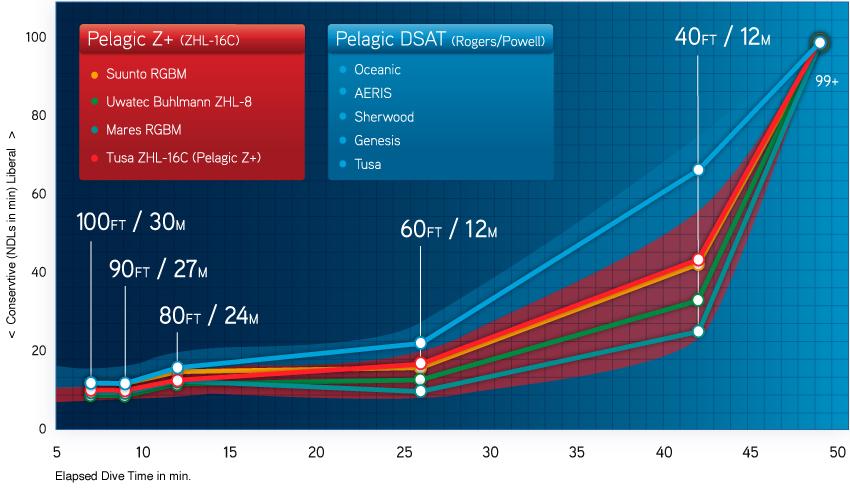 Oceanic have understood the issue of multiple algorithms being used so they have coded dual algorithms into their dive computers, so you can dive on their Pelagic DSAT algorithm, similar to the ones you have been taught on for a more liberal dive with longer NDLs. Or you can set your computer to a Pelagic Z+ algorithm to match your buddy’s dive computer so you can match their profile better.

So with Oceanic computers you can pick and choose how conservative your computer can be and how long you can stay at a given depth depending on which algorithm you choose before you go diving.  The Pelagic DSAT is designed for your warm water, minimal effort diving so it allows you to stay down longer whereas Z+ is more for the rigorous demands of repetitive, cold-water decompression diving at altitude.

Many divers that I’ve dived with have little or no concept of what their dive computer is telling them, they simply wear one because they’ve been told to.They know even less about which algorithm their computer is running off or what it means for their diving, especially when diving with a buddy with a different computer or if it starts bleeping at them.

Personally I’ve never thought the idea of a less conservative algorithm to be a good idea as I’d always rather err on the side of caution with my health.  Dive computers have been designed to work for any diver and let you strap it on and stay safe on the dive even if you stick right up to the limits but everybody ranges in their susceptibility to Decompression Sickness.  That being said it is a useful feature to be able to pick and choose your algorithm to match your buddy or the diving conditions you’re diving in.

Divers also need to take a look at themselves and assess their fitness and diving conditions before they go diving, you need to adjust your personal settings which will affect your algorithms because your computer doesn’t know how fit or hydrated or well fed you are; it can only hypothesis based on the information it’s given.  Dive computers always have your best interest in mind and there’s no point trying to trick it or swap computers and expect to not hurt yourself.

Computers and algorithms are made to keep you safe and are a very useful piece of kit when you know what it is telling you but they will be much more accurate if you input the correct data.