It looks like you're visiting us from outside United Kingdom

10% off nearly everything* use code 10SCUBA
(*Exclusions apply)

The X-Stream fin from Mares is an adjustable, open footed scuba fin which is lightweight and comfortable with a new foot pocket and new blade construction for less turbulence in the water. The X-Stream is designed to provide a greater thrust throughout the water but with less effort and this is achieved by allowing the blade to maintain an optimal angle throughout the kicking cycle along with a channel thrust which, inspired by marine mammals, allows for great channelling of water compared to other fins of the same size.

The X Stream won the prestigious Red Dot product design award illustrating that it is a truly excellent product.

Really high grade well made fin as you would expect from Mares, they really have put some thought into these. They are also lightweight and are ideal for travel and tropical diving, best fins I've owned to date by far

They look great, and the length of the foot pocket is perfect for both the size 8s and the 10s. However, in the 10s (plus drysuit sock) they are very tight around the foot, at the entrance to the foot pocket, making it impossible to put my foot all t

I bought these fins after first trying them to replace my long loved Mares Avantiquattros. Very impressed with them and love them in warm water and cold water too. If you are going on holiday and luggage weight is an issue, these fins are the lightes

A very lightweight but high performing fin. Very comfortable and easy to put on / release with new Mares buckle system. Perhaps a bit on the expensive side, but nonrtheless would recommend.

Previously used Volo Fins which I found very floppy, these fins are much better giving a positive feel in the water. Only problem so far is that the foot pocket is not as pliant as the Volo and my dry suit boots will not go in properly, but they fit

Great fins, delivery service great. The one thing that lets the fins down is the ABS+ buckles, both plastic spring arms on the strap adjustment catches on one of the fins broke the first time I tried to release them. Simply scuba immediately sent me

Very easy to take off and on no suction on the boot ,very light, smooth kick action, very pleased with them

Just used these fins in the sea for the first time i was very disappointed with them I got into a current and the fins had no affect and I had to work a lot harder to get moving than my old split fins. Also the grip on the sole is like standing on ic

Received these about a week ago in the XL size, however were too big (purely my fault) so sent them back for a R size. Returned to me within a few days which is great! Absolutely love them, you get so much power for the effortless kicks and still get

I owned these fins for around 6 months and did under 150 dives with them before the fell to bits. The initial impressions were good, they have good performance and excellent fit. However after a short while the two plastics on the fin blades started

Just tried these out and have to say they are the best fins I have owned. They fit perfectly and I moved effortlessly in the water. Didn't encounter any problems when in currents either. Very easy to get on and off with no vacuum in the foot well

I bought this pair to replace a previous pair of the same fins. I have replaced like-for-like as I loved the previous pair, but beware - the reason for replacement was a failure of the fins themselves. After about three years of use, the material

I bought a pair of these fins in 2012 to use on holiday and given how light they are I would only use them for holiday / warm water diving and not UK drysuit / lake / shore / boat diving. They are very light weight but excellent fins and, 3 years

a stunning fin, especially for travel use. Light weight but strong. the holed foot pockets are great for getting off, and the fin straps are so easy to use. Never had a moments bother from these fins. hinge mechanism also helps to prevent cramping

I bought a pair after seeing my Instructor with them. She has had her pair for years and dived all over the world with them. She loves them. the hinge on the sides also makes a handy carrying handle. I am an Assistant Instructor and can say they are 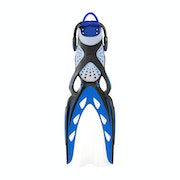